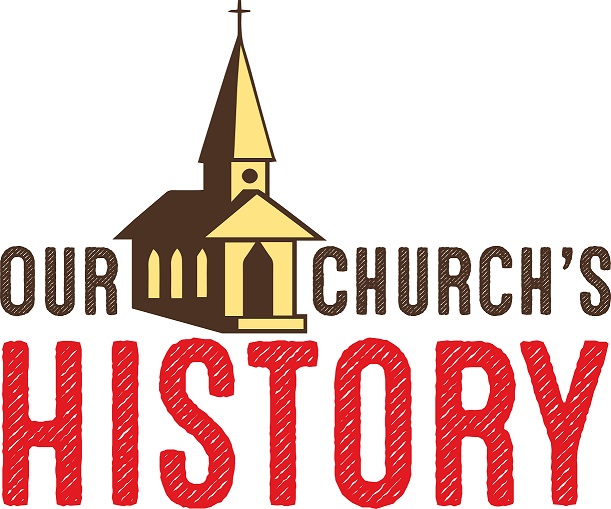 This is a new column which will run each month for the foreseeable future, with the intent of sharing some interesting historical highlights regarding our church. Since February is Black History Month, I thought it appropriate to write about a connection between our church and Black history.

This first article is about Reverend Philip Mitchell who served as pastor for the Congregational Church of Hollis from 1962 – 1972. I’m sure you recognize those years as a stressful period in U.S. history with the Civil Rights protests as well as the Vietnam War taking place. There are definitely some in the church who remember Rev. Mitchell. What is the connection between Rev. Mitchell and Black history month, you ask?

Rev. Mitchell, along with four other ministers in the New Hampshire Conference of the UCC (photo below), flew to Birmingham, AL to participate in the last day of a 5-day march from Selma to Montgomery, AL. This was the 3rd such march (the first two never making it out of Selma), protesting voter discrimination against people of color that was rampant in the Deep South at the time.

Did you know there were actually three marches (or attempted marches) from Selma to Birmingham in March 1965? This fact is important because it influenced Rev. Mitchell’s decision to participate in the 3rd march. The 1st march on March 7, 1965 ended on the Edmund Pettus Bridge (named after a Confederate brigadier general, US Senator, and leader of the Alabama Ku Klux Klan) in “Bloody Sunday” where marchers were beat by Alabama state troopers with billy clubs. Among the marchers beaten was the now deceased civil rights activist and Georgia U.S. Congressman, John Lewis.

The 2nd march on March 9, 1965 never made it out of Selma either, because of a restraining order that Martin Luther King, Jr. did not want to break. The order was issued by a judge forbidding further demonstrations until a filed case was heard in court. MLK turned the crowd around at the end of the bridge in compliance with the restraining order (the date is referred to as “Turnaround Tuesday”). However, later that night three white Unitarian Universalist (UU) ministers were beaten with clubs by four KKK members. One of the three ministers, Rev. James Reeb from Boston, died on March 11 from his injuries. The news coverage of the 1st and 2nd marches and Rev. James Reeb’s death drew national attention and outrage from Americans in the north, motivating many to join the cause. Rev. Mitchell was among those who felt compelled to follow his conscience and participate in the 3rd march in solidarity and support.

On March 17th, after several days of testimony, a judge ruled in favor of the protesters and the 3rd march was organized. The 3rd march started in Selma on March 21, 1965 with 8,000 protesters. By the time Rev. Mitchell joined on the last day, there were an estimated 25,000 people. In addition to the five pastors representing the New Hampshire Conference of the UCC, spiritual leaders of multiple races, religions, and creeds marched along with Dr. Martin Luther King, Jr, including southern Baptist preachers, a Greek Orthodox Archbishop, a Dutch Catholic priest, at least two Rabbis, and at least one nun. On March 24th, celebrities Harry Belafonte; Tony Bennett; Frankie Laine; Peter, Paul and Mary; Sammy Davis, Jr.; Joan Baez; Nina Simone; and The Chad Mitchell Trio all performed at a rally in support of protesters before their final day of the march into Birmingham itself, on March 25, 1965.

Rev. Mitchell wrote/spoke of his experience in a sermon he delivered to The Federated Church of Orleans, UCC on January 19, 2014. I HIGHLY recommend reading the full sermon. It’s not so much a sermon as it is a diary of his 24 hours relating to and participating in the march. It’s an awe-inspiring story for the courage he had and commitment he felt towards this cause. As part of the march, he sang “We Shall Overcome” with Dr. King and the thousands of protesters united in their cause (photo below). One can only imagine how powerful and moving that would have been to hear. At the end of his sermon, Rev. Mitchell shared the following:

“I was naïve enough not to know what the reaction would be in the then small New England town where I was the minister of the only church. The town was stirred up, dust flying everywhere. The Sunday after my return we had the largest congregation I ever saw in that church. We had to set up folding chairs in the aisles.

There were those who were enormously pleased that I’d marched with Dr. King. When I went into the village store, they treated me like Caesar returning to Rome. About ½ of the town was of another mind. “Shouldn’t mix politics and religion!” “The church has no business in politics!” Well, personally I absolutely agree with that. The church should not be involved in politics. But, in my view, the question is not political. It is a moral question. It has to do with human behavior and human rights. It has to do with justice, fairness, what is plainly right.

One evening Barb and I were playing canasta in the living room, wondering what was going on in town, when there was a knock on the kitchen door. I opened the door and there was a man who, as it was told to me, had said he would resign from the Board of Deacons and from the church if I marched with Dr. King. He had a letter in his hand. I took it and read it. It was a letter signed by every member of the Board of Deacons, commending me for having followed my conscience, and he wanted to be the one to deliver it.

I am forever grateful for the maturity of that church. They separated personalities from issues. They debated the issues but I have no memory of even once feeling personally rejected.”

Sadly, Reverend Mitchell passed away in 2018 (obituary). I reached out to his daughter, Christi Chapman-Mitchell, to see if she would share anything her father may have told her about his experience at the march in 1965. It was she who gave me the full sermon. She also gave me two photos from the march (see below). She found these three items, along with some other items her father saved, in a folder he had labeled “things to save”. She shared with me that “When my Dad died, his last vocalizations were trying to sing We Shall Overcome, with my husband and I, singing at his bedside, to a video of Joan Baez.”

Clearly our church, through Rev. Dr. Philip Mitchell, has a very meaningful connection with an enormously important part of black history, and I for one could not be more moved and prouder of this connection. I wish I had known him. I purchased one of the two books he authored, Desire to See God, and will be giving it to the church library should you like to read it.

Rev. Mitchell and the four other NH UCC reverends boarding the plane in Boston on their way to Birmingham, AL

A freeze-frame from an NBC News report showing him singing “We Shall Overcome” amongst a crowd of protesters. 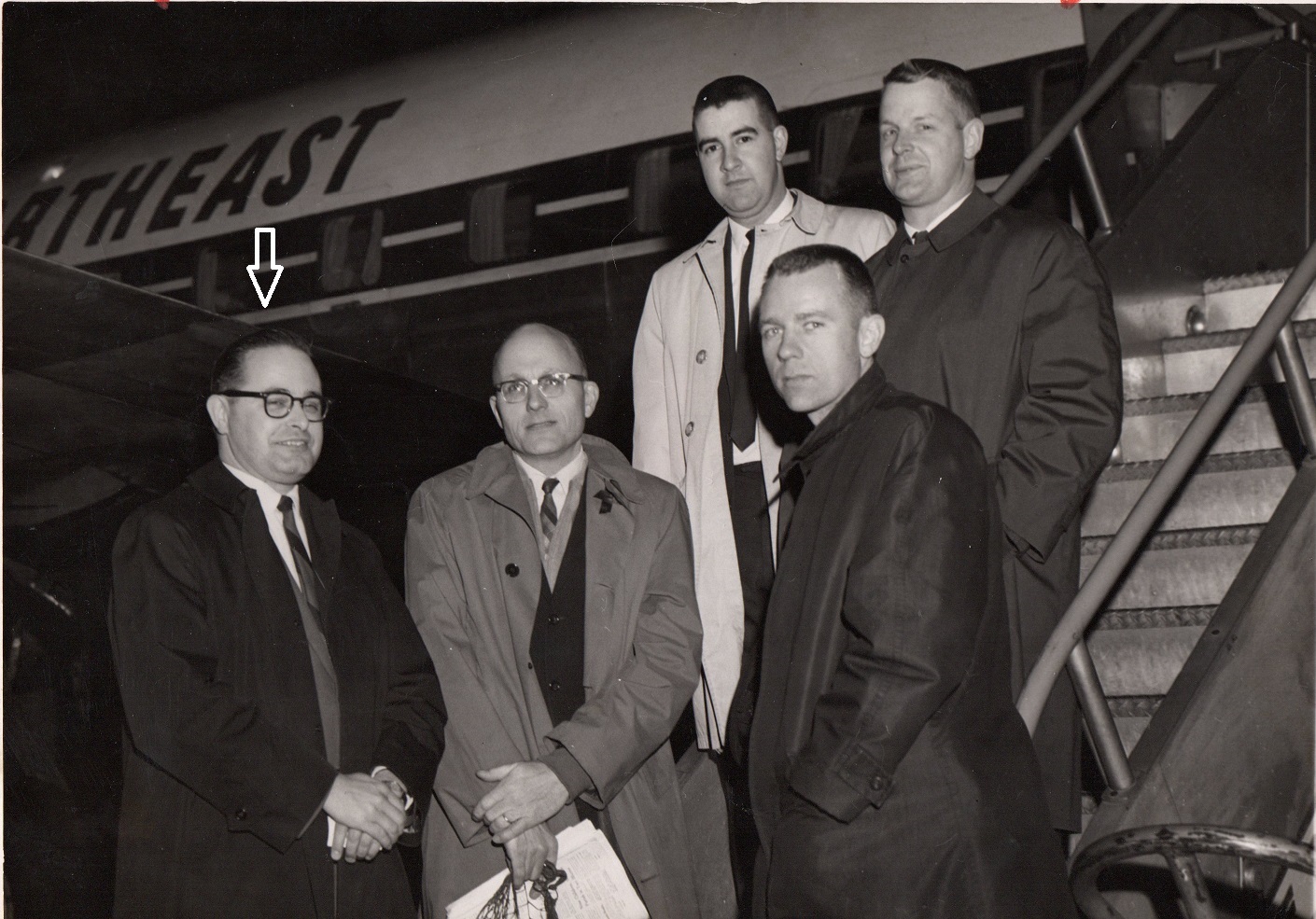 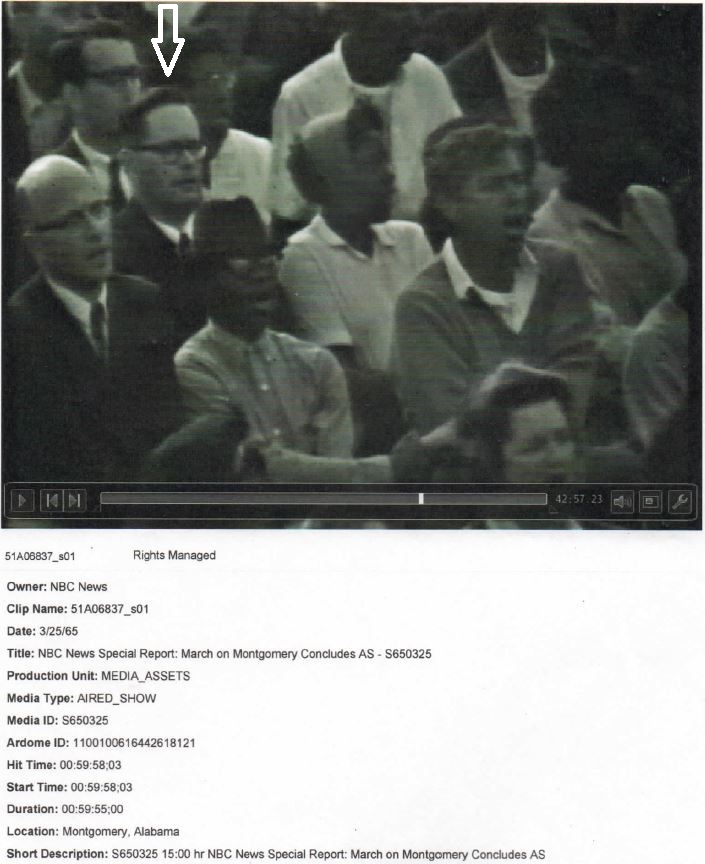