Hopefully, everyone will be back to see the results of the amazing transformation the church has undergone as a result of the completion of the 2020-2021 renovations. Tours and the grand re-opening will take place over Saturday and Sunday, September 11 & 12.

This seems like a good time to tell the history of the various named rooms and spaces we now have since two newly named spaces resulted from the 2020-2021 renovation. It was the simple question from my husband, Eric, “Who are all these rooms named after?”, and me not knowing the answer, that started me on this …And the Rest is History journey! Because we have a total of seven such spaces (see table below), this will be a multi-part series starting with the newest named room: the Saunders Room.

After completion of the 2020-2021 renovation, we have seven named rooms/spaces:

The Saunders Room is located in the northeast corner of the upper level of the church, just off the Meetinghouse chancel. Some may remember it being called the “counting room” prior to the renovation as for many years, it was used to count offerings after Sunday services. It was originally designed as a “vestry” – the room in which clergy and other officiants in the service would “vest” or put on their vestments/worship garments and pray prior to leading worship. It is now a beautiful space to be used as a groom’s room for weddings, and as a quiet sitting or meeting area. Take the opportunity to go into this transformed room and in addition to a wonderful space, you’ll be treated to two historical pictures of the third Meeting House displayed one above the other.

About the Third Meeting House Pictures in the Saunders Room

When you stand in the Saunders Room looking at the photos, you’ll notice the top picture shows the third Meeting House as it looked when it opened in 1804. The bottom picture was taken and colorized c. 1910 – 1923 by M.A. (Addie) Eastman of Hollis. Compare the two pictures of the third Meeting House and you will notice they face different directions! The long sides of the third Meeting House were originally oriented to face north/south. In 1849, the church underwent a major renovation which included turning the church 90°, resulting in the long sides facing east/west. The belfry, cupola, and steeple (previously on the west side of the building), was repositioned to the front (south side) above the main entrances. Imagine lifting and rotating a 68’ x 54’ building with no cranes or motorized equipment! Why did the third Meeting House have two front doors? As was common at the time, the construction of the third Meeting House was funded by parishioners buying/owning pews.  For attendees who did not own pews, men and women entered separate doors and sat in gender-dedicated gallery seating. When the third church burned down in 1923, the church was rebuilt with the same orientation and removed paid pews and the gallery, allowing for the single, main entrance we have today. 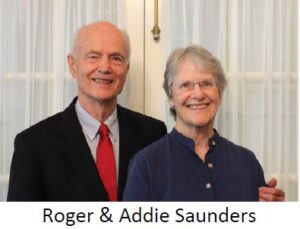 The Saunders Room, in honor of Roger and Addie Saunders, was named as part of the 2020-2021 renovation. Roger joined the church at age 10 in 1942 when his family moved to Hollis. Addie joined when she married Roger in 1959. Their two children were baptized and participated in Sunday School in the church. Roger served the church over many decades, most significantly as a trustee and on renovation committees. He co-managed the 1964-1965 renovation to add the west wing. Later, he negotiated the purchase of 10 acres of land for future church needs and led a team to design and build the present Parsonage on a portion of that land. From 2018-2021, Roger served on the Building Our Vision team which oversaw the design and construction of safety and functional improvements. He also taught Sunday School and was thrilled to see one of his pupils go on to become a minister. Addie also taught Sunday School and was a Trustee. Her favorite board on which she served, however, was the Mission and Action Board where she really got to participate in and see the impact of, our community outreach programs. She also enjoyed working with Fellowship and Hospitality since its inception, preparing special events for the congregation, and being a member of Women’s Fellowship.

The BoV team was proud to honor the Saunders with the naming of this room.