This month, the “Room Names” series continues with the Parkhurst Room. 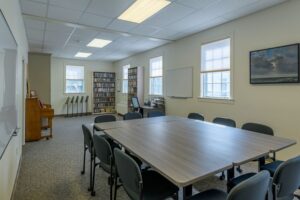 The Parkhurst Room was named/dedicated as part of the 1965 renovation which added the west wing to the church. At the time, it was named in “honor” of Nelson and Hazel Parkhurst as they were both living and active members of the church. Nelson Parkhurst passed in 1984 and his wife, Hazel, passed in 1986, so it is now named in “memory” of them both.

The Parkhurst Room is located at the far west end of the building with windows that face the library and Monument Square. It is a multi-function room, with the north half of the room used for meetings and the south half used as the music space. Pre-Covid, the meeting room half was used regularly for board and committee meetings, and the music room half was where the full choir would gather to get ready for Sunday worship services. This room has also been used for the Christmas Fair Angel Loft for many years. 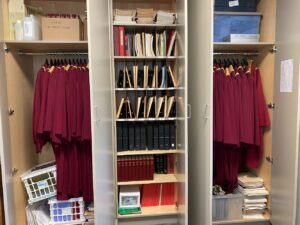 About Nelson and Hazel Parkhurst

Nelson Parkhurst was born in Hyde Park, MA, and made his way to Hollis, NH in the 1910s to buy land to farm. He met Hazel (a Hollis native) as part of the Hollis Grange and they married in 1917. Together they raised four sons and over the years, were active in many town activities and organizations besides the church, including the town fire department, the Hollis Historical Society, the Hollis Grange, and the schools.

In 1940, as the U.S. was preparing for WWII, Nelson joined the Carpenters Union and went to work at the Portsmouth Navy Yard. Not long after, Nelson started his role as church treasurer and stayed in that role for well over 30 years. In addition, upon retirement in 1962 from the Navy Yard, Nelson became very interested in the preservation of the church grounds and building. He became the church sexton/custodian at that time and served as such for 16 years, retiring from those positions in 1978. (Click HERE to read his letter of thanks for his retirement ceremony and HERE to read a letter from his son, Austin, about Nelson’s retirement). 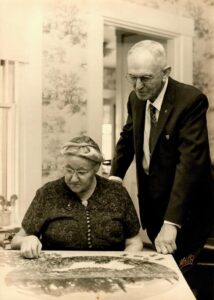 During his time as custodian, the church added the west wing in 1965 doubling his custodial workload. Also, while serving as custodian, he discovered the old collection pouches (c. 1800s) in rough condition in the church attic. They had been saved from the church that burned down in 1923 and subsequently stored (and forgotten) in the attic of the current church. He, and a couple of other church members, restored them to their original beauty, and they have been displayed since then (1976) in a case in the Narthex. (Click HERE to read 1976 newspaper article about the collection pouches.)

Hazel Parkhurst was born and raised in Hollis, NH, graduating from Hollis High class of 1914 and marrying Nelson in 1917. She was a member of the church choir for 68 years, a cook for the Hollis school system, and belonged to the Hollis Historical Society and the Hollis Grange. Her grandchildren nicknamed her “Hot Rod Hazel” – apparently, she drove with a lead foot! She was known to make donuts on Saturdays and kids from the neighborhood would sneak them when she wasn’t looking. She was an avid reader and at one point had read every book in the Hollis Library, so the librarians would get books from the State Library for her each week. Hazel also often assisted Nelson with his various church responsibilities.

For the 1965 room-naming dedication ceremony, the following was written:

It would be difficult, indeed, to number all of the reasons we are convinced that they [Nelson and Hazel Parkhurst] should be honored in this way. As a matter of fact, it would be impossible to number them, for many of the acts of kindness and generosity are known only to them.

Mr. Parkhurst has served as treasurer of this church for nearly 20 years [in 1965] and has done so with remarkable devotion to duty. He handles many thousands of dollars for us each year, but if at the end of the year he happened to be fifty cents off, great would be the distress thereof! His careful work and interest in this office are greatly appreciated.

Mr. Parkhurst also serves as our sexton which means that he does just about everything that needs doing here at the church from washing windows to directing traffic and from rearranging chairs to watering new grass. Certainly, we would be lost without him but, in fact, we are rarely without him. If he isn’t at home, it is almost certain you will find him at the church.

It is unquestionably appropriate to honor Mrs. Parkhurst also. She has not only been a great assistance to her husband in his many endeavors but also has expressed her own clear devotion to the church. Her faithfulness and deep interest in the church should not be allowed to escape notice. We are honored to name a room in honor of Nelson and Hazel.

Nelson and Hazel Parkhurst are buried in the East Cemetery of Hollis. Karen Marino and Nancy Bell (sisters) are Nelson and Hazel’s grandchildren through their son, Winston, as is Jessica Marchant (Karen’s daughter). It is so wonderful to have the family church connection continue through the generations! 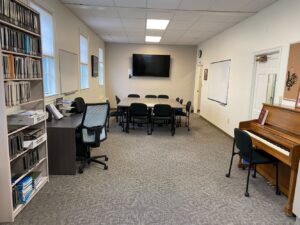 Announcements for the week of January 9, 2022

By Cindy Ryherd This month, the “Room Names” series continues with the Austin Room. The…

Announcements for the week of January 2, 2022

Announcements for the week of December 19, 2021

Announcements for the week of December 12, 2021

© 2020 The Congregational Church of Hollis, UCC