This month, the “Room Names” series continues with the Flagg Room.

The Flagg Room (pictured) was named and dedicated as part of the 1965 west wing addition (the same time the Parkhurst Room was named and dedicated). Named after Etta Proctor Flagg (1868-1962), Miss Flagg bequeathed nearly half of her estate to the church, with the other half being left to the Conference Center at Pembroke, NH. The funds of her estate sale in 1963 which went to the church, helped pay for the 1965 addition. The Flagg Room is located on the bottom floor, directly across from the door that enters the lower level from the West entrance stairs. The room has always been used for Christian Education for children.

Etta was the youngest daughter of Esq. Timothy Emerson Flagg (1824-1898) and Susan Proctor Flagg (1826-1909). At 18 years old, she survived typhoid fever. She taught school in Hollis and then ventured out to teach in Connecticut and ultimately ended up teaching in the Los Angeles school system for about 20 years in the early 1900s. She eventually become the head of the Home Economics Department for the entire LA school system.

Upon her mother’s death in 1909, Etta and her sister Abby inherited and sold the family estate, Maple Way Farm, at 103 North Pepperell Road located at the corner of N. Pepperell and Flagg Rd. (Flagg Rd. was named after her great, great grandfather). During her teaching career, Etta wrote two books which were published: A Handbook Of Home Economics (1912), and A Handbook of Elementary Sewing (1915).
In the 1930s Etta returned to Hollis for retirement and was very active in Hollis organizations: the Hollis Woman’s Club, the Hollis Garden Club, and the Hollis Chapter of the Daughters of the American Revolution. She acted as President of the Hollis Woman’s Club in the early 1930s for two years and started the Garden Committee of that organization. She was also very interested in the Hollis Social Library. 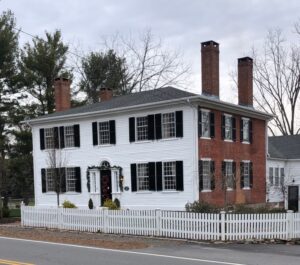 Etta and her older sister Abby lived at 38 Main Street (pictured, the Conant House, built c. 1800, referred to as the “Little Mansion”, one of Hollis’ historical homes). The house was considered very elegant and the Flagg sisters maintained their home with style. Etta’s interest in gardening revealed itself in the beautiful gardens on the property. Her estate was worth ~ $65,000 when it was sold in 1963 and divided between the Hollis Congregational Church and the New Hampshire Congregational Christian Conference in Pembroke.
In addition to her own contributions to the church and town, part of what made my research of Etta Flagg so interesting is her long family lineage in Hollis and in our church, dating back to 1732 with her great-great-grandparents, Eleazer Flagg (1704-1757) and Hannah Knight Hunt (1706-1800). Eleazer and Hannah were the SECOND European couple to settle in Hollis, long before Hollis was even Hollis (it was still part of Dunstable, MA at the time). They were second only to Peter and Anna Powers who settled here in 1730. Eleazer Flagg was an instrumental part of the committee that chose and hired Rev. Daniel Emerson to become the first settled pastor for the church in 1743 (including housing and entertaining Mr. Emerson for three months in 1741 as part of “wooing” him to Hollis).
The generations between Etta’s great, great grandparents and Etta Flagg include Flaggs who also made significant contributions to the town of Hollis and the Hollis Congregational Church, as well as to our country through military service. See the table below of the Flagg generations in Hollis (click on table to see full-sized and to be able to click on links to her Flagg ancestors from Hollis). 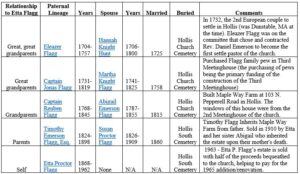 For the 1965 room-naming dedication ceremony,
the following was written:

The large room on the first floor of the addition to the church will be called the Flagg Room in memory of Miss Etta P. Flagg. For many years, Miss Flagg was an active and concerned church member as well as an active member of the community. She demonstrated the priority of the church in her life by dividing most of her estate equally between this church and the Conference Center in Pembroke, New Hampshire. Her generosity provided encouragement for this church as we set out on this building program which has proven to be one of the most needed and most adventuresome programs this church has ever undertaken.
One cannot help but speculate on the strong possibility that Miss Flagg would approve of the great interest we are taking in the Christian education of the young. She was a teacher and thoroughly convinced of the value of learning. She was a great reader and one who felt it important to know recent thoughts on many subjects. She was concerned for education and had a real concern for Christian education.
Her interest in the Conference Center at Pembroke is an expression of her concern for the Church beyond local limits. She had a broad view of things and knew the value and the necessity of looking beyond local interests and local needs.
The memory of Miss Flagg will live long in the minds of those who were privileged to know her and to love her as a friend. Her memory is an inspiration for those who shared a bit of life with her.

Etta Proctor Flagg (1868-1962) is laid to rest with her parents, two sisters, one of her two brothers, and several other Flaggs in the Flagg family cemetery plot of South Cemetery in Hollis, NH. 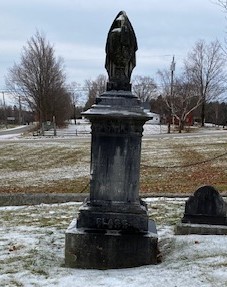 Announcements for the week of February 5, 2023