From the Widening our Vision (WoV) Team… 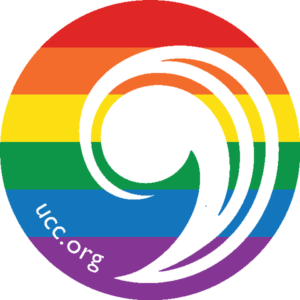 “Never place a period where God has placed a comma.”

Gracie Allen, half of the husband-and-wife comedy team of Burns and Allen, wrote these words in a letter she left for her husband, George Burns, upon her death.  They provided the gentle nudge George needed to keep going, and he continued to act (check out the 1977 movie Oh, God in which George plays the title character!) and share his humor until his death at age 100.

Gracie’s words also served as the inspiration for the new identity campaign launched by the United Church of Christ (UCC ~ that’s us!) in 2004.  The quote was accompanied by the tagline “God is still speaking”  and its logo was a large, black comma.  Why a comma?  Think about what you may have learned in English class (if you’re of a certain age) about punctuation marks:

The UCC Still Speaking comma is an acknowledgment that God is still at work, still creating new things, still revealing new truths.  The period at the end of the book of Revelation in the bible is not the end!  God is still speaking – we have but to listen.

In conjunction with the God is Still Speaking campaign, the UCC released several television ads which were deemed too controversial to air in some locales.  These ads are playful, engaging, and downright brilliant ~ well worth watching!

In “The Bouncer” ad, burly men dressed in black and wearing earpieces stand in front of a church.  A red velvet rope blocks entry until the bouncers admit those worshippers deemed acceptable.  Undesirables are refused entry. Words appear on the tv screen: “Jesus didn’t turn people away.  Neither do we.” and the voiceover says, “The United Church of Christ.  No matter who you are or where you are on life’s journey, you are welcome here.”

A similarly themed advertisement, the “Ejector Seat” ad, shows a wide variety of worshippers (black, white, gay, straight, elderly, homeless, moms with crying babies) entering a church and sitting in the pews.  The camera moves to show a hand pressing a large red button, activating ejector seats under each worshipper deemed ‘unacceptable.’ Words appear on the tv screen: “God doesn’t reject people.  Neither do we.” The voiceover says, “The United Church of Christ.  No matter who you are or where you are on life’s journey, you are welcome here.”

God is Still Speaking, a God that is all-loving and inclusive.  We strive to be a church that welcomes and accepts everyone as they are.  You may see members of the WOV team wearing rainbow comma lapel pins … and now you understand their meaning:

The WOV team asks you to please pray on this and look to future Chimes for more information and question-&-answer articles on this subject.  If you would like to reach out to us directly, please do! WOV@hollischurch.org

Announcements for the week of December 18, 2022